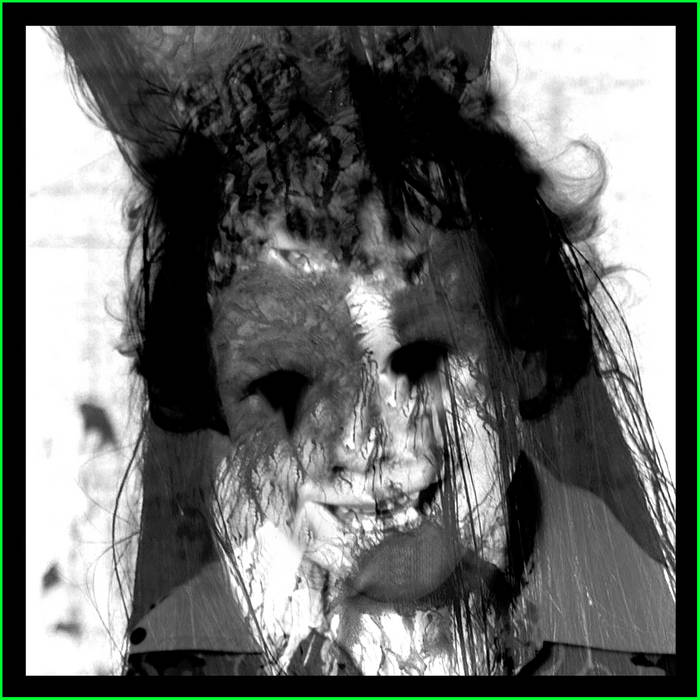 Sven This is a fascinating and highly entertaining album, with many little details. Now it's time for me to discover the sister album "Eyes of Time". Favorite track: Voices In Darkness.

ENTRIES OF CONFUSION was released in 3 editions -

ii. DOWNLOAD + CDR: EDITION OF 35 COPIES: SOLD OUT
Professionally pressed CDR housed in hand numbered printed sleeve. The CDR contains two tracks, Swallowing Colours and Doubts Will Arise. They will not be available for download.

iii. DOWNLOAD + CDR + 7" LATHE CUT: EDITION OF 13 COPIES: SOLD OUT
Includes the CDR mentioned above and lathe cut 7".
The lathe cut contains two additional songs, Demons and Curses and Watch Me Disappear. Neither track will be available for download.

This download is constructed from the run in and run out grooves of 33 different copies from my Diary of a Madman collection of LPs.

33 beginnings and 33 endings. It is both the beginning and the end of the record, but not the album at all.

The collected samples are as follows -

Thirty three separate 33.003 second loops repeated 33 times that have been constructed from the run in grooves of the A Side of the 33 copies of the LP.

Thirty three separate 33.003 second loops repeated 33 times that have been constructed from the run out grooves of the B Side of the 33 copies of the LP.

The loops have been further manipulated with EQ, reverb, effects and volume variations. There is no ‘music’ used from the LP and no added instrumentation.

The CD mix has been constructed using the same principle but the results have been processed in a marginally different way.

The lathe cut uses samples of the grooves but they have been radically processed, sampled and constructed in to 'song' structures.

To learn more about the Andrew Liles Diary of a Madman collection go here - www.andrewliles.com/info/diary-of-a-madman/

5:4
I’m no lover of vinyl. Quite the opposite, yet some of the best musical creations I’ve ever heard all stem in some respect from its archaic world of spin and surface noise, pop and crackle. A full decade ago i was marvelling at Cosey Fanny Tutti and Philippe Petit’s miniature EP Mist While Sleeping / Invisible Whispers, where noise and implied irregularities of rotation speed make for a deliciously queasy and claustrophobic soundworld. Petit went further in my best album of 2013, the astonishing Needles in Pain, which turns the simple facts of how records are physically played into a glorious fetishistic fever dream. And then there’s Leyland Kirby’s peerless Everywhere at the End of the Time, a regular fixture on 5:4 in recent years, where ancient shellac 78s become the basis for a devastating exploration of the development of dementia. All of these are outstanding in the way they explore and exploit the primitive nature and consequences of vinyl playback.

Andrew Liles‘ Entries of Confusion is another work that investigates this arena, from the perspective of the literal ins and outs of the record, specifically the run-in and run-out grooves. Liles’ description of the piece elaborates how it’s

'...constructed from the run in and run out grooves of 33 different copies from my [Ozzy Osbourne] Diary of a Madman collection of LPs. 33 beginnings and 33 endings. It is both the beginning and the end of the record, but not the album at all. […] The loops have been further manipulated with EQ, reverb, effects and volume variations. There is no ‘music’ used from the LP and no added instrumentation.'

While the Osborne album (which has been an obsession of Liles’ for decades) is clearly the point of inspiration and provided the work’s creative impetus, Entries of Confusion is nonetheless ultimately a homage to vinyl itself; quite apart from the actual sound, those 33 references, plus the duration of each of the six parts being 33⅓ minutes, are obvious nods to the rotation speed of LPs.

Considering what we hear, the fact that nothing extra has been added is remarkable. In the opening couple of minutes we can just about make out a weird muffled pre-echo of voices, and before long the crackle, pop and scratch begin to transform into a curious collection of bell-like chimes. As in some of Liles’ other large-scale works, there’s the immediate sense of entering into a very gradual, long-form process of evolution and development. These pseudo-bells are a regular feature in the different parts of Entries of Confusion, though they become surrounded by the most unlikely of noises and textures.

Reinforced in part by the looping nature of the material, various percussive elements emerge. Sometimes they’re discreet, in the form of strange, low poundings; elsewhere they manifest as highly dramatic, stinging accents (at times sounding for all the world like a piano being dropped from a great height) or, at the opposite extreme, like the quiet chuntering of an old machine or the absent-minded tickling of an angklung. i mentioned bells, and in fact the role of pitch throughout Entries of Confusion is fascinating. It’s surprising there should be any at all, considering the starting point for the work is short periods of essentially blank space. Yet in addition to these imaginary chimes we encounter the resonant impacts from a variety of non-existent objects and materials, oblique chords ringing out in darkness, drawn out drones and soft shudderings, and, perhaps most striking of all, blurry sonar-esque pings, as if searching for signs of life.

Not surprisingly, though, the essence of the work is a balance between poles of noise and silence, and this resolves in highly unexpected ways. Watery and squelching textures arise (part two, ‘Where I Wander’, ends up at a place that sounds positively subaquatic), and the motes of surface crackle often coalesce into complex burblings, or via reverb become magnified into extended juddering walls of impenetrable activity, appearing to teeter at the cusp of possible feedback overload. Equally, there are many occasions when everything reduces almost to nothing, as if we were hearing little more than the equivalent of particles of dust falling onto cotton.

This last point is significant, as throughout Entries of Confusion Liles manages to strike a superb balance between active and ostensibly passive forms of creativity. Though everything about it is overtly artificial, very obviously painstakingly created, it’s impressive the extent to which it so often sounds plausibly hands-off, almost like a natural and organic phenomenon. Another paradox is that, while the prevailing impression is of a kind of ‘peripheral music’, it’s nonetheless uncannily compelling. Indeed, the first time i listened to Entries of Confusion, as soon as its 200 minutes had finished i immediately had to play it again – and while i’m fond of large-scale works, i think it’s the first time i’ve ever been motivated to do something like that. Perhaps it’s due to the fact that, by the end, i had become so accustomed to the nature, composition and limits of its particular soundworld that getting on with something else or even just sitting in silence felt and sounded ‘wrong’. Returning to it was the only thing that felt ‘right’. It’s easy to describe music as being “hypnotic”, but in the case of Entries of Confusion this can evidently take on a much more literal meaning.

i spoke before about evolution and development, and it’s true that through the course of its over 3-hour span this aspect is mesmerising. But while it pulls us in, envelops us even, the music is nonetheless elusive, phantasmagorical, always one step removed. It’s like discovering yourself in a description of someone else’s dream. Perhaps it’s this element of distance – in addition to the inherent properties of vinyl – that lends Entries of Confusion an extra hauntological connotation. This is why i called it ‘peripheral music’ earlier: sound that’s both literally and figuratively always at the cusp or the fringes of an implied something else. It perpetually hints at something else, in the process becoming something entirely new itself.